The littlest state in the US has set the biggest goals for renewable energy. Governor Gina Raimondo signed an executive order this month calling for an end to fossil fuel dependence in Rhode Island by 2030. Then, the state’s electricity will be powered entirely by renewable energy sources, if all goes according to plan.

RI is a leader in the fight against climate change, but we still need to take aggressive action as we continue to combat this crisis. Today, I signed an executive order to make RI the first state in America to be powered by 100% renewable electricity by the end of the decade. 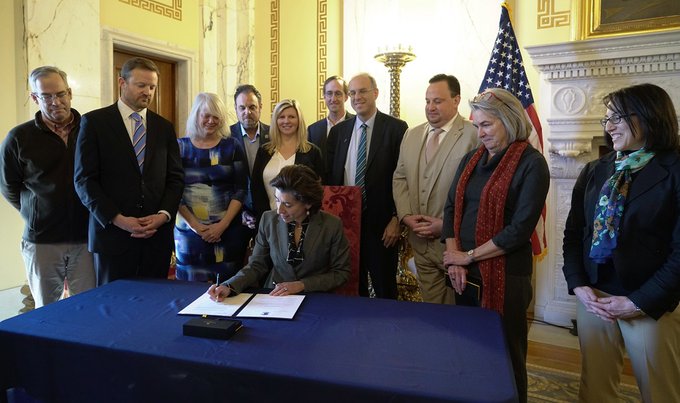 In the annual State of the State speech to lawmakers, the Democratic governor called for addressing climate change “with urgency.” Raimondo celebrated the announcement for the full transition to fully renewable energy but also cautioned that the climate crisis demanded no less action.

“When we meet this goal, Rhode Island will be the first state in America to be powered by 100% renewable electricity. We’re already leading the fight against climate change, but we have to take increasingly aggressive action if we want to avoid catastrophe. As governor of a coastal state and mom to two teenagers, I’m fully committed to protecting the beauty of our state and our way of life for future generations.”

Raimondo, like many other legislators, taps into the annual appearance before a joint session of the General Assembly to highlight Rhode Island’s progress under her watch as well as to outline her long-term vision and spending priorities. Raimondo is positioning her latest environmental effort as a job creation plan and part of an inevitable transition to cleaner energy systems that includes focus on battery storage.

Her renewable energy plan has support from a large representation of trade unions, environmental groups, and wind and solar developers. In the executive order, Raimondo called for the state’s Office of Energy Resources to conduct an analysis of the state’s economic and energy markets to determine what steps need to be taken to reach the 2030 goal. A final report is due by the end of the year.

Nicolas Ucci, who will direct the Office of Energy Resource, said a months-long process will begin with a search for a consultant to look at the “costs and benefits and those opportunities for Rhode Island both in state and regionally.”

Raimondo is on track to meet her previous call to increase Rhode Island’s clean energy supply by 10 times before the end of 2020. Those goals were achieved by significant growth in renewable energy and efficiency programs.

The Rhode Island Renewable Energy Results Will Be in the Details

While Raimondo and Ucci say they expect much of the electricity to come from local, small- and medium-sized land-based solar and wind projects, EcoRI questions whether the governor’s plan will utilize Rhode Island power or will include existing sources of imported electricity, such as hydropower from Canada or nuclear energy from Connecticut.

Also unresolved, they say, is whether the shift to renewables will prompt a reduction in new and existing natural-gas infrastructure and the closure of the state’s six fossil-fuel power plants. (Author’s note: At a public forum I attended 3 years ago, Raimondo talked about natural gas as a “bridge fuel,” to the vocal dismay of the audience.)

Of course, even among environmental activists, Raimondo’s executive order doesn’t go far enough. The Green Energy Consumers Alliance, for example, is looking to include heating and transportation in the 2030 goals, as they account for more than 60% of the state’s greenhouse gas emissions.

“Unfortunately, the Governor’s executive order does not take the steps we already know we need to act on climate change,” according to a Green Energy Consumers Alliance statement.

Some others applauded the governor’s remarks but called on her to do even more. “The reality of the climate crisis demands that we end our reliance on dirty fossil fuels. This commitment to 100% renewable electricity is a major step towards reaching that goal,” acknowledged Jerry Elmer, senior attorney for the Conservation Law Foundation. “The governor must now make good on her promise to support a law that goes beyond mere talk and makes Rhode Island’s climate goals mandatory, including slashing emissions beyond the electric sector.”

Food & Water Watch’s Northeast region director Alex Beauchamp noted that more than half of Rhode Island’s current renewable energy comes from high-carbon emitters such as wood and landfill gas. The General Assembly must approve their removal from the state renewable-energy standard portfolio. “Governor Raimondo should set bold goals to meet the challenge of the climate crisis,” Beauchamp stated, “and that should include ensuring that the state’s clean energy program only relies on clean power from solar, wind, and tidal sources.”

Mattiello claimed that any response to the climate crisis must be national or global. In contradictory actions, he conceded that he will support climate-related legislation, yet a number of climate bills have failed to advance at the Statehouse during his tenure.

“I strongly disagree with (Mattiello’s) position that this is, quote-unquote, a national problem that there is nothing much Rhode Island can do,” Raimondo said. “That’s wrong in every sense of the word. As I’ve already said, it’s factually wrong.” The governor noted that Rhode Island “is uniquely vulnerable to the dangers of climate change” with its eroding shoreline and its rapid air and ocean temperature increases.

“We absolutely have to take state action, and I think he’s dead wrong suggesting that we don’t,” Raimondo said. Opposing it, she charged, is “such a backward way of thinking.”

Raimondo was not the only one to dismiss Mattiello’s comments. They elicited a rare verbal slap on the wrist from the Environment Council of Rhode Island, a coalition of environmental groups and individuals members. Priscilla De La Cruz, the president of the Environment Council of Rhode Island, decried Mattiell’s comments, stating that the climate crisis will effect everything from our economy to public health.

“We are already seeing these impacts take hold. For the Speaker to claim that nothing can be done by state government to reduce the risks to Rhode Islanders is inaccurate. Most of all, we  dispute his assertion that state-level actions will only harm the local economy. That is just  wrong. Reducing fossil fuel usage in favor of renewable energy has been proven to be good  for job creation and for consumers.

Education or Environment: Must the RI Governor Choose?

House Minority Leader Blake Filippi, R-Block Island, said Republicans believe that lawmakers’ primary civic duty must be to fix the education system, and that must take precedence over any other government programs and interest groups.  “Let us come together now to build strong children, and, in turn, a strong future for Rhode Island,” he announced.

Raimondo countered that she envisions a state where everyone is guaranteed the opportunity for an excellent education and where public schools are thriving. With an educated workforce, she believes, the economy would boom, high-speed rail and electric buses would make for easy commutes, and gun violence would be reduced.

“We are on track to make this vision a reality, and we’re going to get there if we continue to invest in what works,” she said in remarks released to the press and public. “So, let’s find the courage to stay on this path and strengthen our state for decades to come. This bright future is ours if we build it together.”