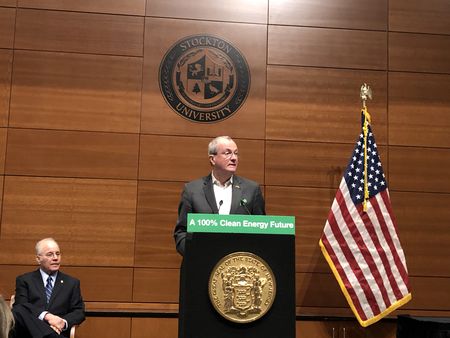 New Jersey will become the first state in the nation to require builders to consider the impact of climate change if they want their projects approved, Gov. Phil Murphy announced Monday as he unveiled the final version of the state’s new energy master plan.

The Democratic governor outlined the plan in a speech at Stockton University in Galloway, calling the 290-page document "ground zero” for “weaning the state off its century-old addiction to fossil fuels.”

Murphy warned Monday that climate change is direct threat to New Jersey. He citied a recent Rutgers University report that said sea levels along New Jersey’s coast are expected to rise more than one foot by 2030 and two feet by 2050.

“Quite frankly, it will be hard for future generations to create their Jersey Shore memories if the Jersey shore becomes only a memory,” the governor said. “We are not gonna let this keep happening without a fight.”

Murphy also painted the plan as a response to how President Donald Trump’s administration and other Republican have responded to climate change.

“We are going to make New Jersey the place that proves we can grow our economy, create jobs, and fight climate change all at the same time,” said Murphy, a frequent critic of the Republican president.

The governor made a prediction, as well: “I guarantee you that within 10 years, every state will have to face up and do what we’re doing.”

State officials said it’s too soon to estimate how much the changes outlined in the plan might cost taxpayers in the state. Republicans warned that New Jerseyans may see their energy rates go up.

Since 1977, state law has required New Jersey to maintain an energy master plan to manage how electricity is supplied in the Garden State. It was last updated in 2015, when the New Jersey Board of Public Utilities took steps to enhance the resilience of New Jersey’s power supply in anticipation of another Hurricane Sandy-level disaster.

In one of the plan’s biggest moves, the state will not sign off on a proposed building project if it “does not align with our broader efforts to combat climate change," Murphy said.

“It will either need to be amended, or it will not be approved,” he added. “In this, New Jersey will lead the nation and set the standard.”

New Jersey got 94% of its energy from natural gas and nuclear power combined in 2018, according to the U.S. Energy Information Administration. Garden State environmentalists are pushing for the state to phase out those two energy sources, but Murphy’s plan allows for both to continue.

The master plan defines clean energy as being “carbon-neutral." That includes nuclear power and allows for natural gas power plants as long as steps are taken to offset the carbon emissions that the plants create.

This is a sticking point for New Jersey’s environmental advocates, many of who joined together in early 2019 and called on Murphy to place a moratorium on all natural gas development in the Garden State.

Jeff Tittel, director of the New Jersey chapter of environmental group the Sierra Club, expressed disappointment that the final version of the master plan relies on the carbon-neutral standard.

“The (plan) still defines clean energy to include incinerators, natural gas, biogas and others,” Tittel said. "It does not call for a moratorium on new fossil fuel projects or a 45% reduction of emissions by 2030, and will not get the state to zero carbon by 2050.”

But Tom Gilbert, the head of ReThink Energy NJ, another environmental advocacy group, said the plan should reduce the state’s use of natural gas, and he was encouraged it calls for gas capacity planning.

The plan also leaves the window open for New Jersey’s three remaining nuclear plants — currently subsidized for a total of $300 million annually — to continue operating in the future. The controversial bailout of those plants ends after three years.

But nuclear power currently accounts for 90% of New Jersey’s clean energy, and is critical for reaching Murphy’s clean energy goals as the first massive offshore wind farm planned for New Jersey waters won’t yet be online when the nuclear subsidy ends. That leaves the possibility that of more bailouts — fund by Garden State electric customers — in the future.

State officials said Monday that there are no immediate plans to ask nuclear plans to shut down, but they will continue to monitor the state’s needs in the years ahead.

Going against the feds

A new federal rule from the Trump administration makes it more difficult for renewable energy to become cost competitive with fossil fuels like coal and natural gas, because it changes how different sources of energy are priced when producers sell their power to the regional electric grid.

Under the new rule, energy producers using renewable energy must account for their government subsidies, requiring that they sell to the regional grid at a higher price.

The rule has left New Jersey uncertain about its future in PJM Interconnection, the regional grid that serves 65 million homes in the Garden State, 11 other states and the District of Columbia.

Last week, the BPU requested that the federal government reconsider the rule, according to an NJ Spotlight report. In its brief, the BPU argued that individual states may be forced to pull out of PJM in order to continue pursuing their clean energy goals, putting the regional grid at risk of dissolution.

The master plan wasn’t the only environmental announcement Murphy made Monday.

The governor also signed a new executive order for a new set of regulatory reforms that his administration has pledged to take in order to make the Garden State more resilient to future impacts of climate change. The pledge, known as NJ PACT (Protecting Against Climate Threats,) calls for the New Jersey Department of Environment Protection to:

Tittel embraced this call for reforms, though he said it didn’t make up for what he called the “short comings” of the master plan.

“This may be one of the most comprehensive packages in the country,” Tittel said of NJ PACT. “Murphy’s (executive order) is critical, especially since New jersey is one of the top states most at risk in the country for sea level rise, flooding, and climate damage.”

Still, Republicans were worried about the costs. State Assembly Minority Leader Jon Bramnick, R-Union, said the plan needs to include natural gas and worried the changes will cause electric rates to rise.

“Murphy’s plan will drive-up costs on families, seniors and businesses while they already struggle to afford New Jersey’s extreme tax burden,” said Bramnick, who is considering running for the Republican nomination to challenge Murphy in next year’s governor’s race.

Those cost concerns shared by the New Jersey Business & Industry Association. Ray Cantor, the group’s vice president of government affairs, said the NJBIA supports the overall goal of reducing emissions but worries that this plan will negatively impact manufacturing and industry in the state.

“While the ambitious goals set forth in today’s announcement are laudable, we remain very concerned by the overall cost impacts to ratepayers and businesses in the execution of this plan — particularly as there has yet to be a ratepayer impact study,” Cantor said.